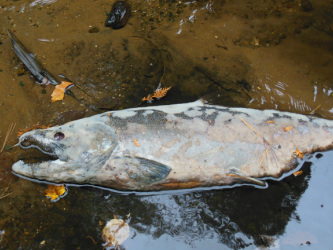 Chinook salmon Carcass
Salmon mediated contaminant biotransport
Salmon can be a vector for the transport of contaminants.  The Great Lakes have a extensive history of environmental contamination resulting from the discharge of organic pollutants such as PCBs and DDT and Mercury from industrial emissions. These chemicals bioaccumlate in the fatty tissue and muscle of fish. The influx of salmon eggs and carcass material provides a high quality food source for invertebrates and fish that can have a high contaminant burden. Thus, spawning salmon are capable of liberating contaminants accrued in the Great Lakes to streams. This salmon derived flux of contaminants can be taken up directly stream consumers such as fish. 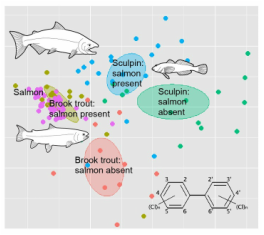 Congener patterns of persistent organic pollutants reveal Pacific salmon contaminant delivery to Great Lakes tributaries
In the Great Lakes, introduced Pacific salmon (Oncorhynchus spp.) can transport persistent organic pollutants (POPs), such as polychlorinated biphenyls (PCBs) and polybrominated diphenyl ethers (PBDEs), to new environments during their spawning migrations. To explore the nature and extent of POP biotransport by salmon, PCB and PBDE pattern from spawning salmon directly to resident stream fish, among streams and lake basins.  Using various multivariate  statistical procedures, we found that POP congener pattern of resident fish was influenced by the presence of salmon, Great Lakes basin, resident species considered, and salmon spawner biomass. Similarity in congener patterns indicated that salmon are a source of POPs to brook trout (Salvelinus fontinalis) in stream reaches receiving salmon spawners from lakes Michigan and Huron but not from Lake Superior. Congener patterns of mottled sculpin (Cottus bairdii) contrasted with those of brook trout and salmon, suggesting that brook trout and mottled sculpin use salmon tissue to differing degrees, bioaccumulate or metabolize POPs differently, or acquire POPs from different dietary sources. Overall, our analyses confirm the role of salmon in contaminant biotransport but also indicate that the extent of salmon-mediated POP transfer and uptake in Great Lakes tributaries is location-and species-specific. This research was presented at the Joint Aquatic Sciences Meeting in Portland, Oregon in 2014. Manuscript in review for publication in journal Environmental Science and Technology. 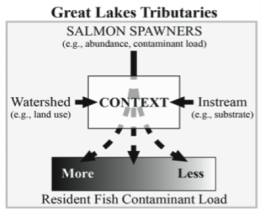 Does context mediate contaminant transport by salmon?  The impact of salmon spawners on the contaminant burden of stream-resident fish may be modulated by watershed variables and in-stream habitat. As an example, urban areas contribute a higher amount of contaminants to streams than forested landscapes. Additionally, in-stream factors such as substrate, volume of large woody debris, and stream slope can influence the retention of salmon carcasses thereby potentially enhancing the availability of salmon-derived contaminants for uptake by stream consumers. We expect these factors to interact with one another and be modified by the abundance of salmon a stream receives. In order to evaluate how the environmental context influences salmon biotransport to stream resident fish, we have conducted a large scale survey of streams spanning a gradient of spawner densities and watershed/habitat characteristics. We will use the data collected from this survey to develop a suite of predictive models which evaluate the influence of watershed and in-stream covariates on stream resident contaminant levels. This assessment will provide researchers and managers with an understanding of the factors that significantly influence stream fish contaminant levels, and lead to more informed salmon and watershed management.  Sample analysis ongoing, this data will form the basis of a poster presented at the 145 annual meeting of the American Fisheries Society in Portland, OR. Manuscript intended for Ecological Applications. 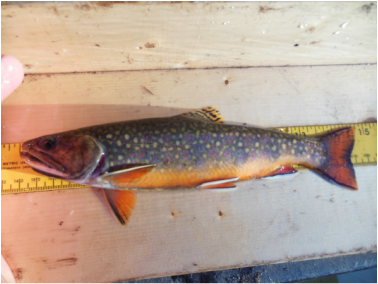 Modeling the effect of salmon on bioaccumulation in coldwater fish  in Great Lakes tributaries. We are using an individual-based bioenergetics-bioaccumulation model to assess how salmon influence the contaminant burden of stream-resident fish in the Great Lakes. The bioenergetics model will be used to evaluate how the supply of salmon carcasses and eggs mediated by salmon density influences resident fish growth.  Consumption and growth rates estimated from the bioenergetics model will be used in bioaccumulation model to predict contaminant body burden. We are developing species-specific models for brook trout, brown trout, mottled sculpin, and blacknose dace which are commonly found in streams receiving salmon runs in the Great Lakes. Our model will be run under different scenarios reflecting varying salmon abundances and varying temperature regime (proximal control on fish growth). Our hope is that the model will we widely applicable and be applied to watersheds around the Upper Great Lakes receiving salmon runs. Data from our large scale survey and instream-manipulation at Hunt Creek will be used to validate model output. We plan to test scenarios that will assess how differences in salmon run size, duration of spawning, and species identity (e.g. Chinook, Coho, or Atlantic) influence the response of resident fish.  This research is in collaboration with Dr. Jim McNair at Grand Valley State University. Manuscript intended for Ecological Modeling.